To the Mercy of the Enemy Playtest Takeaways, Part 1 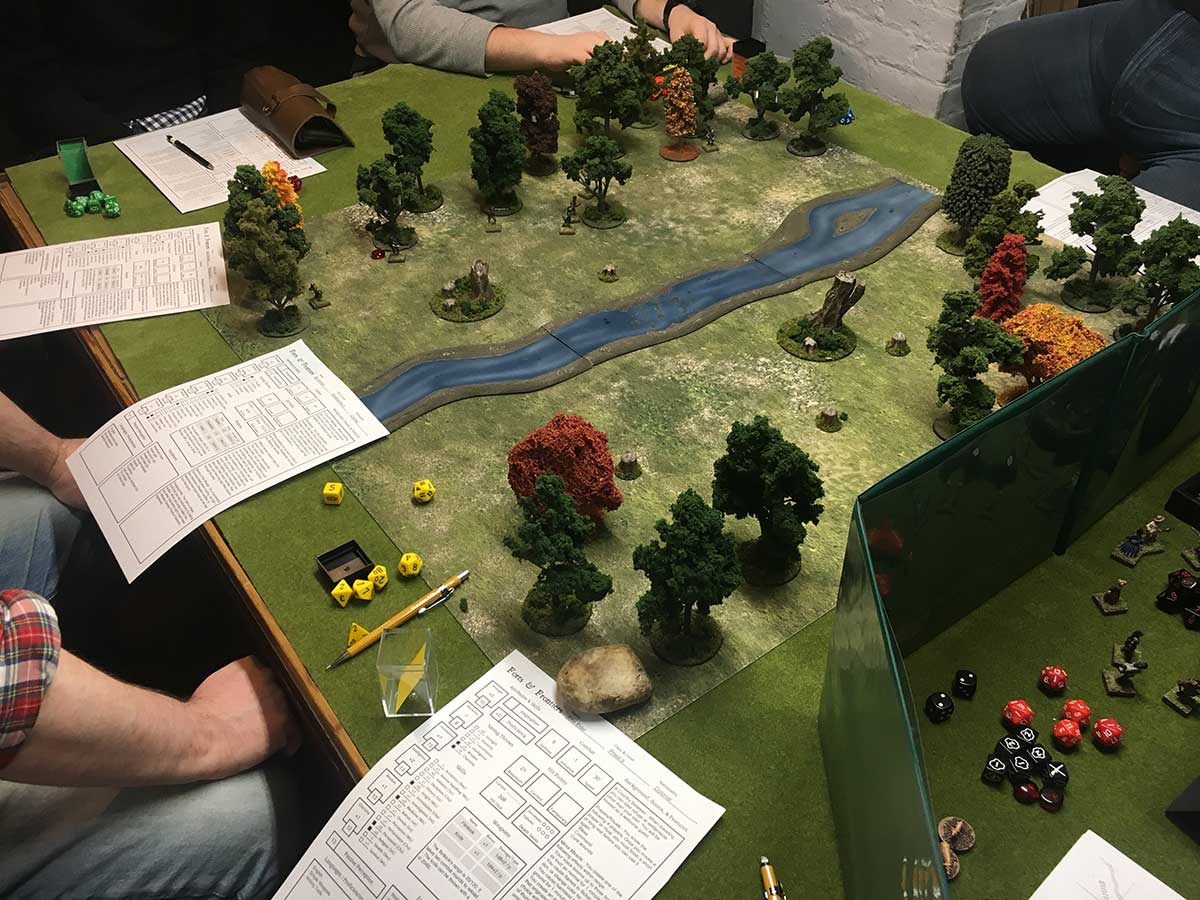 In October of 1755, emboldened by the defeat of General Edward Braddock on July 9 of that same year, members of the Delaware and other nations began reclaiming land in western Pennsylvania that was unjustly taken from them through the lies and false treaties of the Penn family.

On October 16, 1755, the settlement of John Penn’s Creek, near present day Selinsgrove, was raided by Delaware and Shawnee from the nearby Wyoming Valley. Of the 25 settlers, only 1 escaped. The others were either killed or taken into captivity. On October 22, a party, led by John Harris, set out from Harris’ Ferry to bury the dead at Penn’s Creek and attempt to rescue the living now held in captivity.

So began the breaking of the fragile peace on the Pennsylvania frontier on the eve of the Seven Years War. The Penn’s Creek Massacre and the events that followed are the subject of our second Forts & Frontiers adventure module, To the Mercy of the Enemy.

Kimber and I ran our second playtest of To the Mercy of the Enemy on Saturday, February 2 at our club, Metropolitan Wargamers. Our group of seven playtesters spanned three generations and ran the gamut from dedicated miniature wargamer to avid board wargamer to old school D&D player.

This was quite different from our first playtest which consisted of a regular gaming group of four miniature wargamers of roughly the same age. The difference in playtest groups resulted in a game that was both great fun and a great challenge to run. Ultimately, everyone had a good time and left us with focused feedback that had us immediately thinking of ways to improve the adventure and Forts & Frontiers in general.

This is part one of two in a series focusing on takeaways from our second playtest and the feedback we received. We’ve already begun incorporating these into To the Mercy of the Enemy and will likely bring these ideas into the core rules.

One thing we often talk about at Campaign Games is how to give GMs and players the tools they need to bring 17th and 18th century North America alive at the table without having to pursue an online degree in American history.

It may seem like common sense, and I’m sure is obvious to everyone besides us, but, after this playtest, we realized that Forts & Frontiers needs a good deal of encounters (location-based, random, etc.) to provide GMs with material to drive stories forward and to give players the sense of being there in that time and place.

Our first Forts & Frontiers adventure module, The Feast of the Deadˆ, is a quickstart for the game and, as such, all encounters are sequenced. To the Mercy of the Enemy, on the other hand, will be the first stand-alone adventure module.

Inspired by such luminous examples as TSR’s Isle of Dread, Frog God Games’ Hex Crawl Classics, and Cubicle 7’s Journeys and Maps, our takeaway is that we need to incorporate an element of “wandering history” into Forts & Frontiers. Like the examples above (and so many more dating back to the dawn of the hobby), these encounters would be more than just combat with random enemies. Instead, they would be fragments of story that, when woven into the game, would drive the narrative forward and provide a sense of time and place.

Here’s part of an encounter I wrote Saturday evening after the playtest:

A sole figure paddles a birch bark canoe down the Susquehanna. The long black hair, crimson face paint, and fine European garments make it easy to identify the figure as the British-allied Algonquin scout, Andrew Montour. Upon seeing John Harris, he calls out then paddles toward the bank of the river.

Montour is on his way to Philadelphia to meet with Governor Morris. If asked why, he’ll say that he believes that the French are behind the recent attack on Penn’s Creek and that the Delaware and Shawnee from Great Island are being supported by other nations from the Ohio country.

Andrew Montour was a well known figure of the period who lived ten miles or so from Harris’ Ferry on Sherman’s Creek. He had recently returned from Virginia in the fall of 1755 and was in the employ of Pennsylvania Governor Robert Morris, often traveling to Philadelphia to report on the backcountry. Introducing Montour, either randomly or by choice, provides a host of options to the GM and, again, gives the players that sense of being there.

There are plenty of other historical figures like Montour’s neighbor George Croghan who could serve as the basis for an encounter. That said, encounters could, of course, also be purely fictitious. Kimber, in fact, is working on one inspired by a novel of the period that his mother is quite fond of.

We’ll follow up with our second takeaway, which will be focused on a d20 skirmish prototype, before the weekend. Until then, let us know what you think about “Wandering History” over on Facebook or Twitter.