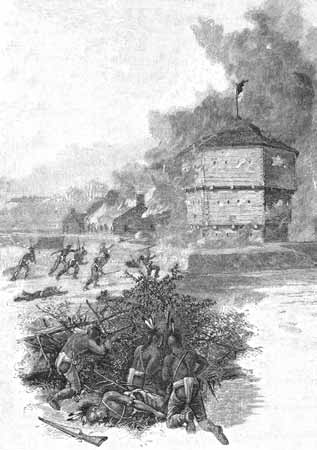 Over the past couple years, we’ve put hundreds of hours into researching, writing, playing, and refining our historic French & Indian War and Pontiac’s Rebellion scenarios. We’ve been fortunate to have had so many eager people to play with us at our home club of Metropolitan Wargamers in Brooklyn, NY, at NJ Con and at the various Historical Miniatures Gaming Society (HMGS) conventions, Cold Wars, Historicon and Fall In!

Now, as we move into producing our first two Forts & Frontiers Battles scenarios books for the French & Indian War and Pontiac’s Rebellion, we’re taking things farther afield and asking for feedback from our wider audience—players like you who have a passion for wargaming the 18th-century American wilderness.

“The Impossibility of Holding Out Any Longer” - The Battle of Fort Presque Isle, June 21, 1763 is now available for free for a limited time. All you have to do is subscribe to our newsletter using the field in the footer of the site between now and Thursday, March 14th, and we’ll send you a PDF of the scenario which will be published in the forthcoming release of Forts & Frontiers Battles: Pontiac’s Rebellion. We’ll also include an army list for Muskets & Tomahawks to give you a sense of unit size and figures per side. If you've already subscribed to our newsletter, don't worry. We'll send a copy of the scenario to you too.

Once you receive the scenario, we’d love it if you could get the it on the table then drop us a line at play@campaign.games to let us know how it went.

Until next time, happy gaming!